Thievery pulled a minor upset in the $75,000 Two Altazano division and Bravura was much the best in the $75,000 Jim’s Orbit division. The Texas Thoroughbred Association (TTA) renamed the series for accredited Texas-sired runners to honor the late Clarence Scharbaurer Jr. who passed away in 2014. 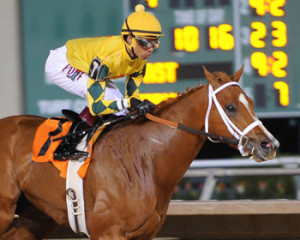 Bravura Dominates in the $75,000 Jim’s Orbit
Last month Victoria Ashford’s homebred Bravura was a convincing winner in the $50,000 Groovy Stakes. He was heavily favored for tonight’s $75,000 Jim’s Orbit and did not disappoint. Jockey C.J. McMahon guided the chestnut colt from his far outside post to the lead and won the six-furlong stakes in 1:10.59, one of the quickest times of the 2016 Sam Houston Race Park meet.

“We expected a great race and he delivered,” said Calhoun. “I was glad to see him get away so quickly. This colt’s very sharp and. C.J. fits him very well.”

“He walked into the gate and stood perfectly,” said McMahon. “He left there on his ‘A’ game. When the other horse ran to us, I squeezed and he ran on. He never ceases to amaze me.”

Ashford was extremely proud of her Early Flyer colt.

“I’ve bred horses for 25 years and this was my first Texas Stallion Stakes,” said Ashford. “It means everything to me. Bret told me from the beginning to be patient; that this colt had talent and we just needed to give him time. That’s what we tried to do.”

This was the third Jim’s Orbit victory for Calhoun, who trained 2014 winner Ibaka and last year’s winner, Supermason. He indicated that Bravura would make his next start at Lone Star Park.

This was the third win in a row for Bravura ($3.60), whose bankroll topped the $100,000 mark this evening. Bravura, who was also bred by Ashford, is by Valor Farm stallion Early Flyer out of the Hadif mare Coryphee.

Keene Thoroughbred LLC’s Silver Doddge (by Silver City), was runner-up in the Groovy with David Cabrera aboard and finished second again in this race followed by Jet Over (by Jet Phone). The top three finishers were all sired by Valor Farm stallions, although Silver City no longer stands at the Texas farm. 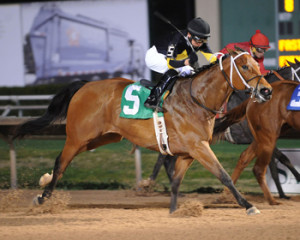 Thievery Closes for the Victory in the $75,000 Two Altazano
Trainer Steve Asmussen won two previous editions of the Two Altazano with Color Code in 2012 and. Makeshift in 2013. Tonight he pulled a mild upset with Thievery, a Valid Expectations filly owned by the Ackerley Brothers Farm. She ran second to Too Much Prada in the Texas Stallion Stakes last September and put it all together this evening with a very confident ride from current leading Sam Houston jockey Iram Vargas Diego.

The bay filly sat off the front runners, mounting a bid at the top of the stretch and won by a neck in 1:12.16.

“She is so nice and gave me everything,” said Diego. “Riding for Steve is a dream come true.”

John Cilia, racing manager for Ackerley Brothers Farm, was on hand to accept the trophy.

“It was nice that she got back on a fast track,” said Cilia. “She caught some off tracks in Louisiana. It’s very gratifying to win a stakes at Sam Houston, as Houston is home for Bob and Lee (Ackerley), Steve picked out the dam for this filly. Valid Expectations was Bob and Lee’s first big runner. He died last year, so we miss him, but this filly carried on his legacy.”

“She’s a very nice filly,” said Asmussen via a phone interview following the stakes. “Valid Expectations has meant a great deal to me and my family.”

Diego is the current leading rider at Sam Houston Race Park and is riding first call for the Asmussen barn.

“He is doing a very good job for us,” added Asmussen. “He and Pablo (Ocampo, assistant trainer for the Houston string) get along well and it has worked out well.”

Thievery was bred by Glory Days Breeding Inc., which is the breeding operation of the Ackerley Brothers. Her sire, all-time leading Texas stallion Valid Expectations, stood at Lane’s End Texas and was campaigned by the Ackerleys and trained by Asmussen during his racing career.

Thievery paid $13.20 as the fourth betting choice. She earned $45,000 for the Two Altazano win, which was just her second victory in ten career starts.