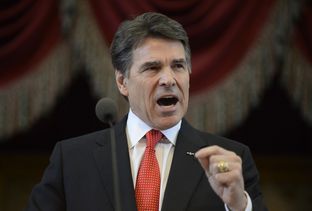 Enlargecredit: Bob Daemmrich
In his Jan. 29, 2103, State of the State speech, Gov. Rick Perry avoided hot-topic issues like abortion, immigration and gun control and focused instead on infrastructure, budget reform and education.

Gov. Rick Perry is warning state legislators that it could be a long, hot summer in Austin if they don’t pass his top priorities: funding water and transportation projects and cutting business taxes.

With a month left in the regular session, Perry spokeswoman Allison Castle said Friday that the governor is prepared to bring lawmakers back in special session if they don’t act on his signature issues.

“The governor laid out his priorities in January to ensure a strong economy for the next 50 years, including instituting fiscally sound budget principles, significant tax cuts and making sure Texas has the necessary roads and water infrastructure to support our growing state,” she said. “His priorities haven’t changed.”

Castle said the Legislature still has plenty of time to act before the clock runs out on the 83rdTexas Legislature next month. But she said Perry won’t stand for incomplete work on his top items.

“He’s been very clear that he won’t sign the budget until he signs significant tax relief,” she said. “And if they don’t address all of these priorities by the end of the session, the governor is willing to keep them here as long as it takes to get it done.”

Perry has veto power — and a history of using it. He can also call an unlimited number of 30-day special sessions once the regular session concludes.

During his State of the State speech at the beginning of the session, Perry called on lawmakers to use money from the fat Rainy Day Fund to fund billions of dollars in improvments to water and transportation infrastructure. And early last week, he laid out a $1.6 billion tax cut plan.

The governor is planning to meet with Republican legislators to discuss his priorities at a House GOP caucus meeting Monday afternoon.