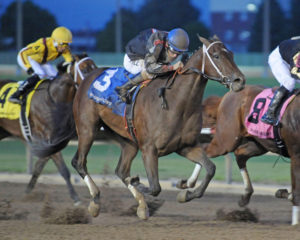 The gelding by Sing Baby Sing, who is also the sire of Grandma’s Princess, rallied to win by a neck in a time of 1:13.06 for six furlongs. Just like Grandma’s Princess, Raising Rumors broke his maiden at first asking against claiming company at Churchill Downs and then stepped up to stakes company at the Kentucky track. Raising Rumors finished fifth in the Grade 3 Bashford Manor Stakes before shipping to Iowa. He now has two wins from three starts with earnings of $59,880.