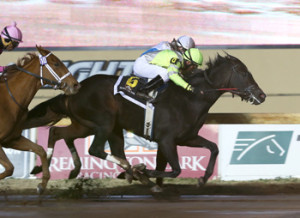 Joyce D. McGough of Grandbury, TX is the proud owner of My Master Plan, winner of the $50,000 Wayne Hanks Memorial Stakes, a six and one half furlong sprint for Texas-bred fillies & mares, 3 & up at Lone Star Park on Sunday.

A 3-year-old daughter of Oratory out of the Vice Regent mare One O Seven, My Master Plan stalked the pace on the outside going four, then three wide in the turn, and made a bid under jockey Luis Quinonez at the 5/16th marker to get clear in upper stretch. With a few instructive taps of the whip she widened the gap into the final sixteenth and was hand ridden to the wire posting a two and a half length victory over Infectious in second with Expect to Fly finishing third.

“She broke nice and was out there controlling the race,” said winning rider Quinonez. “I had her stay with the pack and then see if we could just put them away and she did. She knows how to win and she loves to.”

The win was the career fifth of seven starts for the Donnie Von Hemel trained filly, and with the $30,000 winners cut today puts her total earnings at $169,567. She now has three stakes wins after picking up two during the Remington Park meet.