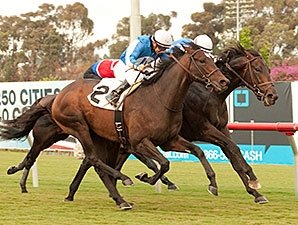 Silentio, one of the nation’s top turf runners in 2013, has been retired from racing and will stand his first season at Dallas and Donna Keen’s Keen Farms in Burleson, Texas. Silentio is a son of multiple graded stakes winner Silent Name (Jpn), the leading sire by 1989 Horse of the Year Sunday Silence standing outside of Japan. Silentio will stand for a $1,000 fee as property of Acacia Racing.

Formerly owned and bred by Wertheimer et Frere out of an A.P. Indy mare, Silentio earned $712,815 with a record of 19-4-1-7. He broke his maiden at first asking as a 2-year-old and as a 3-year-old won the Grade 2 Sir Beaufort Stakes on the grass at Santa Anita Park in just his fourth career start. He enjoyed his finest season as a 4-year-old in 2013 when he captured the Grade 2 Citation Handicap on the Hollywood Park turf and placed in four other graded events, including the Grade 1 Frank E. Kilroe Mile Stakes and Breeders’ Cup Mile. At age 5, he placed in three more graded stakes and showed his versatility with a third-place effort behind Goldencents in the Grade 2 Pat O’Brien Stakes, going seven furlongs on the synthetic surface at Del Mar.