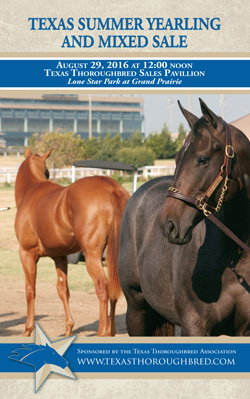 The Texas Thoroughbred Association announces it has hipped 106 yearlings, 21 broodmares, nine weanlings and two horses of racing age for the upcoming Texas Summer Yearling and Mixed Sale to be held on August 29 at 12 noon at Lone Star Park. The catalog is now online in a traditional PDF version and a new interactive version. This will mark the first yearling sale in Texas since Fasig-Tipton last held one at the same location in 2014.

Texas stallion Too Much Bling, whose offspring Shaded and Bling on the Music just swept both divisions of the Texas Thoroughbred Futurity at Lone Star Park earlier in the month, leads the Southwest contingent of sires. Other regional sires represented include Chitoz, Euroears, Grasshopper, Half Ours, Intimidator, My Golden Song, Run Production, Star Guitar, Valid Expectations and Yankee Gentleman. Emerging sires such as Dominus, Crossbow, Justin Phillip and Liaison are also represented.

“We are gratified to see the response from consignors to the relaunch of this sale,” said Mary Ruyle, executive director of the TTA. “We think it’s important to the Texas industry to continue this venture, and we are pleased with the quality of the catalog.”

All yearlings from this sale will be eligible to be nominated to the Texas Thoroughbred Futurity in 2017, which will be run in two divisions for an estimated purse of $100,000 apiece at Lone Star Park.

Tim Boyce, who has been contracted by the TTA to manage the sale, is excited by responses as well and added, “We will have launched a new web feature that will allow consignors to display pictures and videos of their horses in the online catalog. I think this concept will be advantageous to consignor and buyer interaction and will help in marketing the sale in general. People will be able to see the great conformation of some of our best consignments before they hop on a plane.”

The mixed sale session features a dispersal of broodmares from William S. Farish’s Lane’s End Texas, which recently announced its closing. The dam of Shaded, the recent Texas Thoroughbred Futurity winner, is included in this lot. Weanlings and yearlings are also included by Lane’s End Texas stallions Too Much Bling and Grasshopper, who will stand the 2017 breeding season at Valor Farm in Texas along with fellow former Lane’s End Texas stallion Congaree.