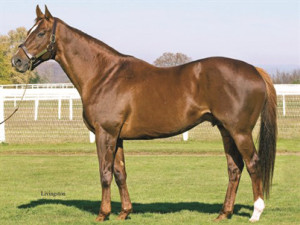 Congaree, a multiple Grade 1 winner and accomplished stallion, will stand the 2016 breeding season at William S. Farish’s Lane’s End Texas near Hempstead. Farm Manager Danny Shifflett said the 17-year-old stallion is due to arrive today. A stud fee will be announced soon.

Congaree earned $3,276,490 during his racing career with five Grade 1 victories from seven furlongs to 1 ¼ miles in the Swaps Stakes, Hollywood Gold Cup, Carter Handicap and Cigar Mile (twice). He finished third in both the Kentucky Derby and Preakness Stakes and also found success in Texas with a victory in the Grade 3 Lone Star Park Handicap.

As a stallion, Congaree has sired the earners of more than $15.4 million with 15 stakes winners. Among his progeny are Grade 1-winning millionaires Jeranimo and Don’t Tell Sophia. The latter is out of a daughter of Valid Expectations, Texas’ all-time leading stallion who stood at Lane’s End Texas until being retired from stud duty in 2013.

Congaree is a son of champion Arazi out of the Grade 1-placed Mari’s Book mare Mari’s Sheba. Congaree’s half brother, Sangaree by Awesome Again, is a Grade 1-placed stakes winner who stands in Indiana.

Congaree, who stood the 2015 season at Saratoga Stud in New York, was bred and campaigned by Texans Bob and Janice McNair’s Stonerside Stable and is still owned by the couple under the Magnolia Stable name.