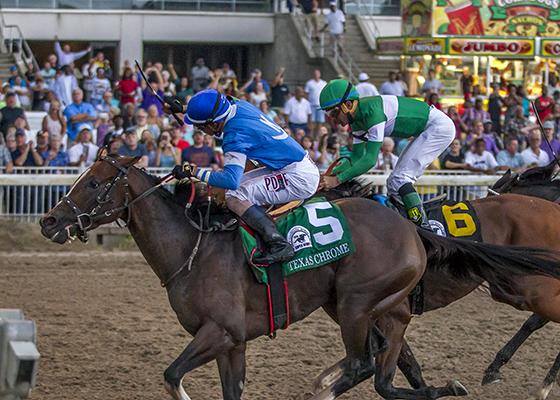 After a couple of close finishes against graded stakes company, Texas Chrome became a graded stakes winner on Saturday with a gutsy victory in the Grade 3, $400,000 Super Derby at Harrah’s Louisiana Downs.

Rated just off the pace in the early stages of the race, Texas Chrome engaged the leader Dalmore, a Grade 3 winner in California, as the field turned into the stretch, and the two battled to the wire with the Texas-bred prevailing by a half-length under regular rider C.J. McMahon. Texas Chrome, who is owned by Danny Keene’s Keene Thoroughbreds LLC and trained by J.R. Caldwell, stopped the timer at 1:49.87 for 1 1/8 miles.

Texas Chrome, a colt by Grasshopper who was last year’s Texas Champion 2-Year-Old Colt/Gelding, came into the race after a victory in the $100,000 Super Derby Prelude Stakes, a second in the Grade 3, $250,000 Iowa Derby and a third in the Grade 3, $100,000 Matt Winn Stakes at Churchill Downs. He also recorded stakes victories in the Texas Stallion Stakes and TTA Sales Futurity at Lone Star Park, Governor’s Cup Stakes at Zia Park and Gold Rush Futurity at Arapahoe Park. His record now stands at 12-7-1-3 with earnings of $602,462. 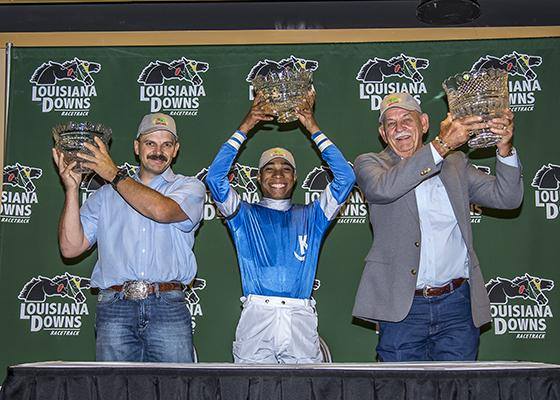 Texas Chrome’s sire Grasshopper formerly stood at Lane’s End Texas and has been relocated to Valor Farm near Pilot Point, Texas, for the 2017 breeding season. Coincidentally, Grasshopper ran in the 2007 Super Derby, finishing second to Going Ballistic as the odds-on favorite.

Trainer Caldwell indicated to Daily Racing Form‘s Mary Rampellini that the Grade 3 Oklahoma Derby at Remington Park on September 25 could be the colt’s next target.