Gerard Melancon became the 65th North American jockey to ride 4,000 winners when he guided Doc R U It to victory in the sixth race at Delta Downs Jan. 30.

Sent off as the second choice in the 10-horse field of $4,000 claimers, Accredited Texas-bred Doc R U It won by two lengths for owner-breeder Jodie Winn and trainer Glynn Winn of Thornton, TX.

“I’ve had a very blessed career,” said Melancon, 45. “Reaching 4,000 wins is special to me. All my family and friends came to the track tonight and I thank them for their support over the years.” 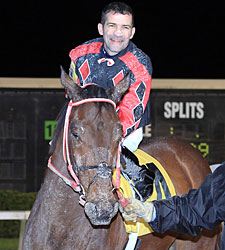