By Mary Cage
There are two meanings of the word “race” for Texas-bred Brooks Open Gold. A 7-year-old gray gelding by Open Forum and out of the Alphabet Soup mare Alphabet Gold, Brooks Open Gold not only competes in races at the track but also in barrel races.

After finishing fifth in what was likely his final career start at Lone Star Park on July 16, his owner – Haley Thorne – will now focus on the gelding’s barrel racing career. The gray, who she calls Steel, wrapped up his racing career with 40 lifetime starts. Although he never reached the winner’s circle, he garnered three seconds and five thirds, as well as earnings of $20,014.

Steel entered Thorne’s life in March 2014, shortly after the gelding finished third in a maiden claiming at Sam Houston Race Park – his first in-the-money finish since December 2012. Brought to her attention by Dr. Geneve Dundas, a veterinarian and friend of Thorne’s, Steel immediately impressed Thorne with his calm demeanor. This quality of Steel’s convinced Thorne to purchase him and begin training him for barrel racing.

After having spent most of his life at the racetrack, Steel had the chance to “just be a horse” now that he was in the care of Thorne. With the help of Thorne’s friend Catherine Thompson, Steel was started on barrels. The gelding learned the basics such as stopping, backing, and loping circles and, along the way, he impressed Thorne with his intelligence.

But the allure of horse racing lingered in Thorne’s mind. Now that she owned Steel, her interest in the sport had a chance to become more than just a daydream. She continued to race the gelding, entering him in races at Lone Star Park during the spring Thoroughbred meet. In the five races Steel competed in for Thorne during 2014, he garnered a pair of seconds, two fourths, and sixth, earning $10,306.

Along with his success on the track, Steel was learning the skills needed for barrel racing. When the Lone Star Park meet concluded, Thorne put a greater focus on barrels for the gelding, even beginning to enter him in competitions. As the first racehorse she has worked with, Steel not only impressed her by defying the “crazy Thoroughbred” reputation but also with his demeanor in general.

“Steel is a joy to ride, and anyone can handle him,” Thorne said. “He is gentle, calm, level-headed and wants to please. . . He has taught me that a good horse is just a good horse. No matter what I ask him to do, he will do it. He may not be great at anything, but he will dang sure try to please with anything you ask him to do. Racehorses don’t have to be ‘crazy’; I believe a lot of the stigma with racehorses acting crazy has to do with their handling. . . We have a mutual respect for one another, and can predict each other’s moves. I know him, and he knows me!”

Steel spent the latter half of 2014 as a barrel horse, but when the 2015 Lone Star Park Thoroughbred meet neared in the spring, Thorne began to ponder the prospect of racing the gelding yet again.

“I knew he was not near in good enough shape to run a mile so I began taking him to Lone Star Park about every other day to exercise,” Thorne said. “Once I felt we were in shape enough, we began entering races.”

Steel’s 2015 racing campaign was not quite as successful as that of the previous year, seeing him finish off the board in four of five starts. The highlight of his year was his runner-up effort in a maiden claiming event on the turf in July. Unlike most racehorses, Steel spent his nights turned out on pasture and even trained barefoot up until his first race of the year.

On July 16, just days prior to the conclusion of the Thoroughbred meet at Lone Star Park, Steel went to post for the final race of his career. Thorne, his biggest fan, sported a black tank top with bright green text that read, “Run Steel Run.” She was hoping the gelding could go out with a win. Unfortunately, it was not meant to be. Sent off as the second longest shot in a field of eight, Steel received a rough trip, managing to cross the wire in fifth. 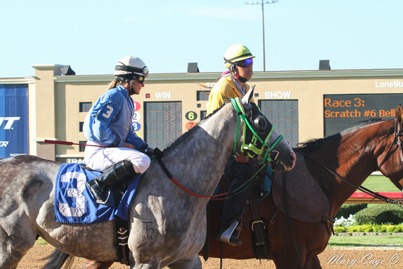 Now that Steel’s racing career has reached an end, Thorne plans to make him a full-fledged barrel horse. The gelding still has much to learn, but Thorne is confident that the intelligent gelding will take everything in stride and continue to transition well from racing to barrel racing.

“He adapted very well to his new home, as well as his new training and competing in barrel racing,” Thorne said. “I have learned good horsemanship skills in any discipline can carry over and are relevant in another discipline. Having success in one aspect of the horse business definitely can carry over and help in another area. . . As with every horse I have, Steel has taught me a great deal of information, and we will continue to learn and grow on our journey together.”