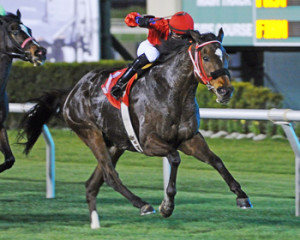 Expect Royalty Pulls the Upset in the $50,000 Houston Distaff
Seneca Destiny, winner of the 2016 San Jacinto Stakes on January 22 at Sam Houston Race Park, was sent off as the betting choice in tonight’s first feature, the $50,000 Houston Distaff for Texas-breds. However, it was the winner of the 2015 San Jacinto, Expect Royalty, who came flying in the final furlong of the mile and one-sixteenth turf feature, to score the upset.

Bred and trained by Leroy Pollok and owned by his wife, Loyana, the 6-year-old daughter of Valid Expectations ran fifth to Seneca Destiny last month. But with regular rider Iram Vargas Diego aboard, she returned her stakes-winning form this evening. Molly’s Honor set the early pace under jockey Lindey Wade, covering the first quarter in :25.20 and the half-mile in :50.11. A trio of runners got into gear and made the late bid, with Expect Royalty winning by a nose over Whiskey Eyes. The final time, over the firm Connally turf course, was 1.44.19.

“She’d been off five months and needed that last race,” said Pollok. “I thought she could do it and tonight she proved she’s back. Iram gave her a great ride; we are blessed to have him.  It didn’t look like he had much room, but he spotted a little hole and got through.”

Diego won four races on the card this evening and is engaged in a contentious battle with David Cabrera and DeShawn Parker for leading rider honors.

Sent off at 6-1, loyal followers of Expect Royalty cashed a $15.20 win ticket. This was the seventh turf victory for the dark bay mare, whose career earnings stand at $211,450.

Bully Good, bred by Robert Luttrell and owned by Luttrell and his wife, Myrna, was making his eighth start on the grass. The 5-year-old son of My Golden Song had hit the board in six of his seven attempts on the turf. He ran fifth here on January 23 in the $50,000 Richard King, but improved significantly this evening. Gerardo Mora guided Bully Good from off the pace, confidently closing on the outside to draw clear by 1 ½ lengths. He covered the mile and one-sixteenth turf contest in 1:42.36.

“I thought he could have won last time out,” said Calhoun, who was reached by telephone following the victory. “He runs well on the turf and I am pleased for the Luttrells.”

Mora was leading rider here two years ago, but has been riding at Delta Downs and limiting his Houston mounts to stakes appearances.

“Bret told me to make sure he had a clean trip and that he would run nice for me,” said Mora.

Supermason, winner of the 2015 Jim’s Orbit division of the Texas Stallion Stakes, made his first career start on grass for owner Brad Grady. Sired by Grasshopper, Supermason was ridden by Lindey Wade, who sent the bay gelding to the lead, holding for third with Early Ride completing the superfecta.

The night belonged to Bully Good, who dismissed off at odds of 10-1, and rewarded his followers with a win tickets in the amount of $23.40. Bully Good is out of the Macho Uno mare Uno Mas Promesa, making him a half sister to Grade 3-winning Texas-bred Promise Me Silver, by Silver City. 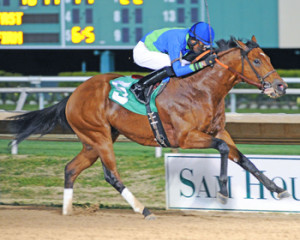 Control Stake, owned by Maggi Moss, has been a patented front-runner in winning six of his 13 starts, including three stakes. Trainer Tom Amoss told rider DeShawn Parker to let the 4-year-old Discreetly Mine colt get to the lead, which has been his preferred running style. Parker followed instructions to perfection and guided the long-striding colt to victory in 1.09.99, winning by a margin of three lengths.

“I want to thank Maggi Moss and Tom Amoss,” said Parker. “They have given be a lot of good mounts in my career. Tom told me the horse has to be in front, so kick him out there and he’ll do the rest. He pinned his ears like he really wanted to do it; I was very impressed with him.”

This was the seventh win for the Florida-bred Control Stake, who topped $300,000 in earnings with the win this evening. Sent off as the second betting choice, he paid $4.60 for the win. Oklahoma-bred Johnny Whip closed for second under David Cabrera, with Double Ours, overcoming a troubled break to run third with Florent Geroux aboard.  Last year’s champion, Ghost is Clear, owned and trained by Mike Maker, was scratched.