A Heart The Size of Texas: Texas Bling 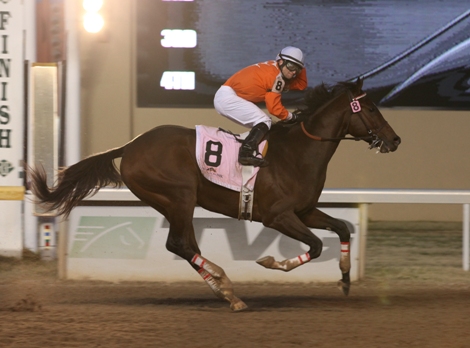 They say everything is bigger in Texas, and if that’s the case it is easy to imagine that the heart of a Thoroughbred named Texas Bling is biggest of all 3-year-olds competing on the early trail to the Kentucky Derby Presented by Yum! Brands (gr. I). A runner born with gumption, courage, and class, Texas Bling has already made a name for himself on the road to the Derby. Although he comes from a modest background, he has given his connections no reason to do anything but dream.

You may not have heard of Texas Bling’s trainer, Danele Durham, a lifelong horsewoman who admits ” I’m not well-known nationally” and who has been training Thoroughbred racehorses in the Longhorn State since 2007. You probably haven’t heard of his dam Anythingmore, who never won in four starts and produced only one other winner from seven foals. His sire Too Much Bling is better-known, one of the top stallions in Texas, but even as such has a relatively affordable stud fee of $4,000 — and with $239,483 in lifetime earnings, Texas Bling is the richest horse he’s ever produced.

“It’s almost one of those fairy-tale kind of stories; it seems too good to be true,” Durham remarked. “He’s a homebred and his mother hadn’t produced a whole lot of impressive stock before him.”

No one told Texas Bling he wasn’t supposed to win the $300,000 Springboard Mile Stakes at Remington Park last December, so he did… at odds of 128-1. No one told him he couldn’t keep up with top-of-the-line horses in the $150,000 Smarty Jones Stakes at Oaklawn Park on Jan. 21 either, so he gave the regally-bred Will Take Charge a run for his money down the stretch, barely losing the bob to finish second by a neck. And no one told his connections he shouldn’t throw his hat in the ring for the sophomore series at Oaklawn, where he is currently stabled with Durham’s string. It is the first time she’s had horses at the Hot Springs, Ark. oval.

Texas Bling races in the silks of Lewis A. Hall’s Hall’s Family Trust, bold orange emblazoned with Texas Longhorns. The colt began his initial training on Hall’s farm in Aledo, Tx., and was send to Durham at Retama Park last December before he turned two.

“When they were unloaded I looked at that colt and thought, ‘Oh my God, he’s special,'” the trainer recalled. “He had a real purpose about him, an extra little something in his step. He was very big and gangly but he wasn’t an awkward kind of colt. You could tell he was going to grow into his body.”

Texas Bling took eight starts to break his maiden, and finally did so on the turf in October of 2012.

“We never asked him for much,” Durham said. “We used a couple of Texas-bred races at Lone Star to get him some experience, and he was running against colts that proved to be 5 1/2- and 6-furlong runners. We weren’t expecing him to have that kind of speed. He trained with a lot of enthusiasm and ran like a colt that obviously wanted to go longer. We knew we had a little tweaking to do, a little guidance, but we didn’t give up on him.”

Lewis Hall is known as a breeder of grass horses, and after Texas Bling broke his maiden, his connections decided to try him in the $75,000 El Joven Stakes on the grass at a mile at Retama. Traffic troubles resulted in a sixth-place finish, but Durham didn’t lose faith.

“I wasn’t disappointed,” she said. “He’s such a big colt; if he had gotten out of traffic he would have had a chance to make a big move.”

Perhaps it was the sixth-place finish, perhaps it was the four-race string of turf starts. At any rate, Remington bettors couldn’t have been colder to Texas Bling in the Springboard Mile, which he won by 1 3/4 lengths while returning $259.60 on a $2 ticket.

“For the people who had been around him, the clocker, the gate men, it wasn’t such a shock,” Durham said. “There had already been talk on the backside when we were training at Remington Park; he had been training very well with really good works, starting to become a young horse that looked like he was going to do something. When they were going to post I thought the tote board was wrong. Even on paper when you looked at the speed figures, there’s no way he should have gone off that much of a longshot.”

Texas Bling’s form was flattered when the top two horses he beat in the Springboard Mile went on to win stakes — Will Take Charge flipping the tables in the Smarty Jones, and third-place finisher Worldventurer rolling by 4 1/2 in a seven-furlong overnight stakes at Sam Houston.

“He’s beaten good horses,” Durham said. “When I talked to (Oaklawn Park racing secretary) Pat Pope to seek out stalls, I told I’m ‘I’ve got a colt I’m bringing to run in your 3-year-old series.’ He smiled and I don’t really know what he was thinking; I’m sure he’s heard that before, and I said, ‘I promise, I’m bringing you the real deal.” 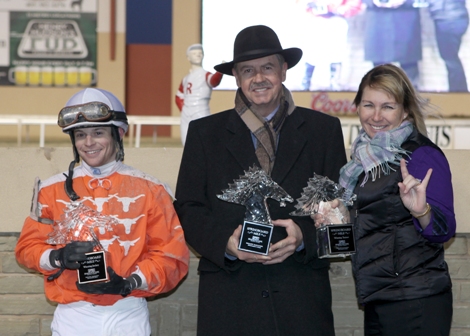 Durham, a native of San Antonio who grew up riding show jumpers and dressage horses, was exposed to her father’s Thoroughbreds and had her own homebreds.  She has three children, a 19-year-old son who attends Texas Christian University, and two daughters, 12 and 14, in middle school.

“I’ve been in the industry, just not real publicly,” she said. “I was raised around the sport so I’ve been able to be at the right hand side of some very classic trainers. I’ve been to the big races and tracks, and my father was a sportsman. About four years ago, Mr. Hall sent me a few of the second- and third-string horses that were not fitting into his higher-level programs, and we went from there.”

Hall eventually put Durham in charge of all his runners, the best of which is Texas Bling.

“I treat him like another horse, and it’s just another day,” the trainer said. “I just try to keep it real simple around the barn. He’s a very outgoing colt and he’s always been really playful. We can’t go very many days without taking him right back to the track after a work or a race. He reminds me of a horse from back in the 1970s, when those horses would run a week before a big race, they’d have a prep race. He trains like an old iron horse.”

Ever-playful Texas Bling always has a tether ball or vitamin bottle on a rope in his stall to keep him busy, and he likes to look out from his stall to watch other horses going to the track.

“He loves when people come by,” said Durham. “We haven’t had any issues at all with him being aggressive. People love to come by and pet him. I’ve got some really neat pictures of Mr. Hall kissing his nose.”

Granted, Texas-bred horses are not predominant in winner’s circles of the nation’s biggest races — but the state has not gone unrepresented throughout history. Groovy, champion sprinter in 1987, was bred in Texas (here is an excellent Sports Illustrated piece by William Nack about his success) and grade I winner Got Koko, who defeated Azeri, was also a Texas-bred (read about her accomplishments here).

One time Durham asked an old-school horseman what was the difference, why did Affirmed beat Alydar every time? “He had the will to win; they were equally talented, but some horses just have more will to win,” he told her.

“And I think this horse’s will overcomes the fact that he’s a Texas-bred,” she said.