Texas Champion Promise Me Silver Retired, To Be Sold at Keeneland 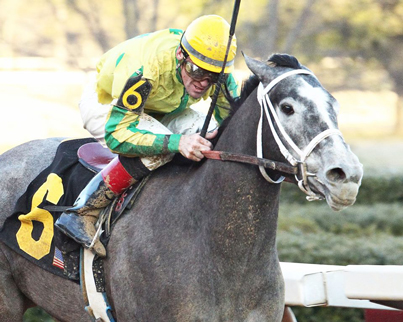 Promise Me Silver, a graded stakes winner and two-time Texas Champion, has been retired from racing and will sell at the Keeneland November Sale, according to a report from Mary Rampellini of Daily Racing Form.

A homebred running for Robert and Myrna Luttrell, the daughter of former Valor Farm stallion Silver City won 10 of 14 starts and banked $486,681. Named the Texas Champion 2-Year-Old Filly and Texas Champion 3-Year-Old Filly, the Bret Calhoun trainee began her career with eight straight victories, including seven against stakes company. Most of her success came against open company with stakes wins at Oaklawn, Fair Grounds and twice at Churchill Downs, highlighted by the Grade 3 Eight Belles Stakes on the undercard of the Kentucky Oaks. She also had plenty of success in her home state with stakes wins at Retama Park, Sam Houston Race Park and Lone Star Park. Fittingly, her last victory came in this year’s Valor Farm Stakes at Lone Star.

“Her two biggest attributes were her class and heart,” Calhoun told Rampellini. “She just had a lot of class about her. She won her first eight races, and you think about it, she won over six different tracks. For her to handle all that mentally and physically, you don’t see that much. She had troubled trips from time to time, as all horses do, and she just overcame it. She had that will to win.”