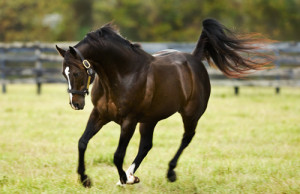 Valid Expectations, Texas’ all-time leading stallion, has died at the age of 22. The son of Valid Appeal was retired from stud duty at William S. Farish’s Lane’s End Texas in 2013 and had been pensioned in Kentucky.

Valid Expectations topped the Texas sire list for virtually his entire tenure in the Lone Star State after standing his first two seasons in Florida. He led the North American freshman sire list in 2001 by both winners (27) and progeny earnings ($1,397,911).

All told, Valid Expectations sired the earners of $33.1 million with 46 stakes winners. His leading earner is millionaire Saratoga County, winner of the 2005 Gulf News Dubai Golden Shaheen (G1). Valid Expectations is also represented by Texas-bred Ivan Fallunovalot, a four-time stakes winner of $476,910 who is expected to compete in this year’s Breeders’ Cup Sprint (G1).

‘The thing you have to say about him is that he did what he did in Texas, which made it even tougher,” said Lane’s End Texas Farm Manager Danny Shifflett, who managed the stallion since he came to Texas in 2000 at what was then called Huisache Farm. “Almost everyone involved, from the shareholders to those to bred mares to him to those who raced one of his offspring, had fun and came out well in the end. He had average earnings per starter of nearly $62,000. He set a standard in Texas that will never be achieved again, and his horses competed worldwide.”

Valid Expectations was the first “big” horse for two-time Eclipse Award-winning trainer Steve Asmussen, who conditioned the sprinter for Texas brothers Lee and Bob Ackerley through a career in which he won 12 of 27 starts with seven stakes wins and earnings of $596,092.

“He was the most intelligent horse I’ve ever been around,” added Shifflett. “He knew what his job was; he would tell us when mares were ready to breed. He knew better than the vets. He was an incredible animal who impacted every aspect of the equine industry that his babies participated in. They excelled in barrel racing, polo, cutting, showing, and of course as racehorses and broodmares.”