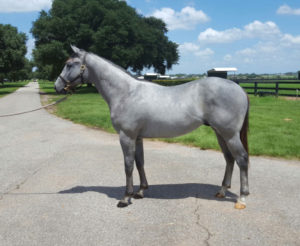 A Texas-bred colt by Too Much Bling sold for $105,000 on August 29 to top the Texas Summer Yearling and Mixed Sale held at Lone Star Park. The auction, held by the Texas Thoroughbred Association in partnership with Lone Star Park, marked the first Texas yearling sale since Fasig-Tipton held one at the same location in 2014.

“We had a few high dollar RNAs that would have really boosted the average if they had sold, but we are pleased to have a yearling average of close to $10,000 for the relaunch of this sale,” said Mary Ruyle, executive director of the TTA. “That is considerably higher than the last yearling sale held here in 2014 by Fasig-Tipton, and I think it shows that there can still be a viable auction here for Texas horsemen and those in the surrounding region. We are looking forward to having our second 2-year-olds in training sale this spring.”

The sale had to pause for a short time during the yearling session as a strong thunderstorm passed through the area. The delay was to ensure the safety of the horses and handlers, and the TTA and Lone Star Park provided an open bar for attendees during that time.

“Given the market conditions now, I think we can be somewhat accepting of the results, as far as the buybacks,” said Tim Boyce, who managed the sale for the TTA. “It’s higher than we’d like to have, but given the fact that we kind of reopened this market, it’s almost like we’re starting over a little bit.”

Trainer Danny Pish purchased the $105,000 sale-topper from the consignment of Lane’s End Texas, agent. The colt is out of the Mineshaft mare Fast Find, who has produced two stakes winners by Too Much Bling, Scooter’s Choice and Shaded. The second-highest price was also a Texas-bred by Too Much Bling consigned by Lane’s End Texas. The filly out of the stakes-producing Geri mare Red Cell went to Keith Asmussen.

Too Much Bling formerly stood at Lane’s End Texas and for the 2017 breeding season has been relocated to Valor Farm near Pilot Point, Texas.

A colt by Uncle Mo went to $155,000 during the yearling session but did not meet its reserve.

In the mixed session, two broodmares sold for $45,000 to Ken Carson, agent, as the highest price. One was Paddle Out, a daughter of Valid Expectations in foal to Congaree, and the other was Fast Find, the dam of the sale-topper.

The Texas 2-Year-Olds in Training Sale will return in the spring with a date to be announced.