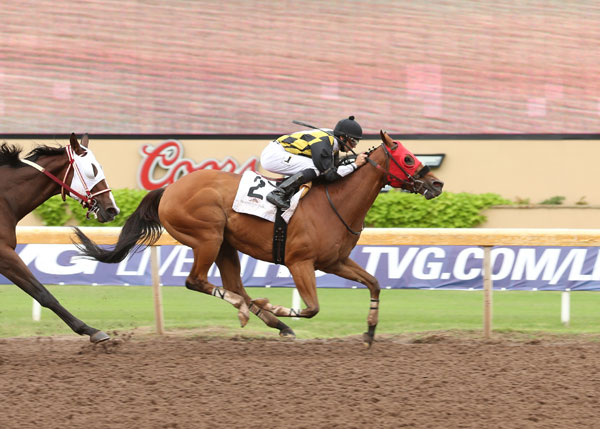 Remington Park’s champion sprinter from 2015 was trying to prove his worth once again, but it wasn’t easy. For most of the $150,000 David M. Vance Sprint on Sunday’s Oklahoma Derby undercard, Ivan Fallunovalot raced in tight quarters in the 6-furlongs sprint. He had about as much room as a sumo wrestler in a phone booth.

With jockey Lindey Wade urging him between the rail and front-runner Wings Locked Up, his competitor shut that door in a hurry. Wade checked up off of heels and waited patiently.

He had to sit second most of the way down the stretch before a tiny opening appeared like a miracle ray of sunshine that opened through a thunderstorm and the acceleration that Ivan Fallunovalot showed was like an Indy Car racer stepping on the gas.

The 6-year-old Texas-bred son of Valid Expectations won for the third time in a row, stopping the timer in 1:09.29 and it wouldn’t be beyond belief that he lost about a second and a half in this race. There are those who believe he had a shot at breaking the track record for 6 furlongs of 1:08.20 set by Smoke of Ages in 1991.

“Yes sir, I have to agree that all’s well that ends well,” said jockey Lindey Wade. “I’m just thankful it worked out the way it did.”

And when that flash of light of an opening finally came?

“I could feel the horse accelerate and I knew we had him,” said Wade.

Ivan Fallunovalot earned $90,000 in this race, which was named the Remington Park Sprint last year, when he also won the race. The David M. Vance was then the prep race for the Sprint Cup, which has now assumed the Vance name. The Texas-bred has now earned $650,808 – more than $300,000 of that at Remington Park. His record is now 23 starts, 14 wins, three seconds and one third. He just loves to win.

Still it might have been the toughest win of his career, tip-toeing through the mine fields of trouble he encountered.

Ivan Fallunovalot, who was bred by Eileen Hartis, paid $2.40, $2.10 and $2.10 across the board, finishing 1 length ahead of Wings Locked Up, a Munnings gelding owned by Sad Sac Racing and bred by Avalon Farms Inc. Candip took third.